‘After the Great War: A New Europe 1918-1923’, focuses on the history of East-Central Europe during the inter-war period 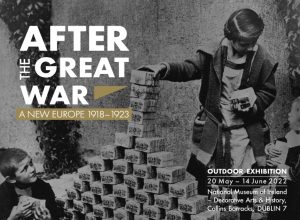 Glencree partners in Exhibition prepared by the European Network Remembrance and Solidarity, hosted by the National Museum of Ireland until 14 June 2022

View panel discussion moderated by Prof. Jay Winter of Yale University to coincide with the launch of the Exhibition here > ‘A New Europe 1918/1923–2022: Memory and Challenges’

20/5/2022: After the Great War: A New Europe 1918-1923, an international exhibition on the aftermath of the Great War, created by the European Network Remembrance and Solidarity and hosted by the National Museum of Ireland – Decorative Arts & History, Collins Barracks, has officially opened from today.

Prepared by the European Network Remembrance and Solidarity (ENRS) in cooperation with an international group of historians, the exhibition summarises the tumultuous beginnings of the interwar period, with particular emphasis on the history of East-Central Europe.

Over 200 archive and multimedia materials – pictures, maps, and films –  together with individual stories of those who lived then present a complex, yet coherent picture of a New Europe. The main goal of the travelling project is to illustrate the scale of the political changes and their impact on current politics as well as to reveal different national memories.

The exhibition aims to present well-documented facts in an original and refreshing way by highlighting their mutual connections and weaving them into one narrative, considering multiple perspectives.

Today’s opening includes a public panel discussion on ‘A New Europe 1918/1923–2022: Memory and Challenges’, moderated by Prof. Jay Winter of Yale University with the participation of:

Deputy Lord Mayor Joe Costello said, “It is an honour for me to have the opportunity to participate in the launch of this exhibition in the National Museum of Ireland- Decorative Art & History, Collins Barracks entitled, After the Great War: A New Europe 1918-1923. The traumatic years that brought so much death and destruction to Europe from 1914-18 must never be forgotten. Neither should the years that followed be forgotten as Europe sought to address the fragmentation of the old order and sought to comprehend the new order that was being created to the East. I want to compliment the Polish embassy, Glencree Centre for Peace and Reconciliation, the European Network Remembrance and Solidarity and the National Museum for putting this Exhibition on display in Ireland.”

Lynn Scarff, Director of the National Museum of Ireland, said, “The National Museum of Ireland is proud to host this exhibition from the European Network Remembrance and Solidarity. Here in Ireland through the Decade of Centenaries events and commemorations we have seen the complexities and varying perspectives involved in commemorating the Great War and the events that followed. I welcome the opportunity for visitors of the museum to learn about this tumultuous period of events from our neighbours’ experiences and perspective across Europe.”

Glencree Centre for Peace & Reconciliation Chairperson, Barbara Walshe said, ‘Glencree is delighted to partner with the European Network Remembrance and Solidarity, (ENRS) and National Museum of Ireland to enable a greater understanding of the forces that shaped Europe as a result of World War I, particularly Eastern Europe, such an awareness is often missing for those of us who live on the periphery of Europe’

Since 2018, the exhibition has been on show in 11 European countries, in cities including Prague, Sarajevo, Bratislava, Verdun, Berlin, Warsaw, Vienna, Vilnius and Tallinn.

More information about the project, team of experts and the exhibition’s European tour can be found: www.enrs.eu/afterthegreatwar

The presentation of the exhibition in Dublin is co-funded by the European Union and carried out by the European Network Remembrance and Solidarity in cooperation with the National Museum of Ireland, the Glencree Centre for Peace & Reconciliation and the Embassy of the Republic of Poland in Dublin. Glencree also wishes to acknowledge the Embassy of Switzerland in Ireland for supporting our involvement in this event.

The exhibition will run until the 14th of June 2022. Admission is free.

After The Great War Press Release