Tucked in nature. Steeped in history. Grounds to explore

The slow, winding mountain road to Glencree sets the tone for what is to come.

Follow the gentle sweep of the avenue into our peace campus as it introduces a marriage of history and nature unlike any other. These 16 acres of grounds, with 200 years of history – for the most part turbulent until peace finally descended 50 years ago – offer a place to explore, a place in nature, a place of peace.

Built by the Oblates of Mary Immaculate soon after they established the Reformatory, St. Kevin's Church sits quietly at the entrance to the Glencree Peace Campus alongside a small graveyard, the final resting place of some of the boys and clergy who once called Glencree home.

Completed in 1806, this building originally served as an army Barracks; in 1859 it was converted to St. Kevin’s Reformatory by the Oblates of Mary Immaculate; in the aftermath of World War 2 it was a refuge for children from Germany and Austria under Operation Shamrock. Today, the Bridge Building houses an exhibition area, meeting rooms and accommodation.

The skeletal remains of this Wicklow-stone dormitory stands as a reminder of the many boys who passed through its doors in the shadow of the famine, into World War 1 and up to the early days of World War 2 when the 'inmates' of St. Kevin's Reformatory were finally relocated to Daingean Industrial School in Country Offaly.

An armoury building in the early days of the Glencree Barracks, today the Armoury Café is a place of warm welcome and hospitality for our many visitors.

Originally the bakery and workshops where the young boys learned a trade during their time at St. Kevin's Reformatory, this building was redeveloped in the early 2000s to house the Glencree Centre for Peace and Reconciliation headquarters and administrative offices.

The schoolhouse for the boys of St. Kevin's Reformatory, this building will soon provide new meeting and accommodation facilities. This development work will be undertaken by the Office of Public Works (OPW) in support of our mission to become a leading Global Peace Centre so that we can bring more people together to find solutions to sustainable peace. 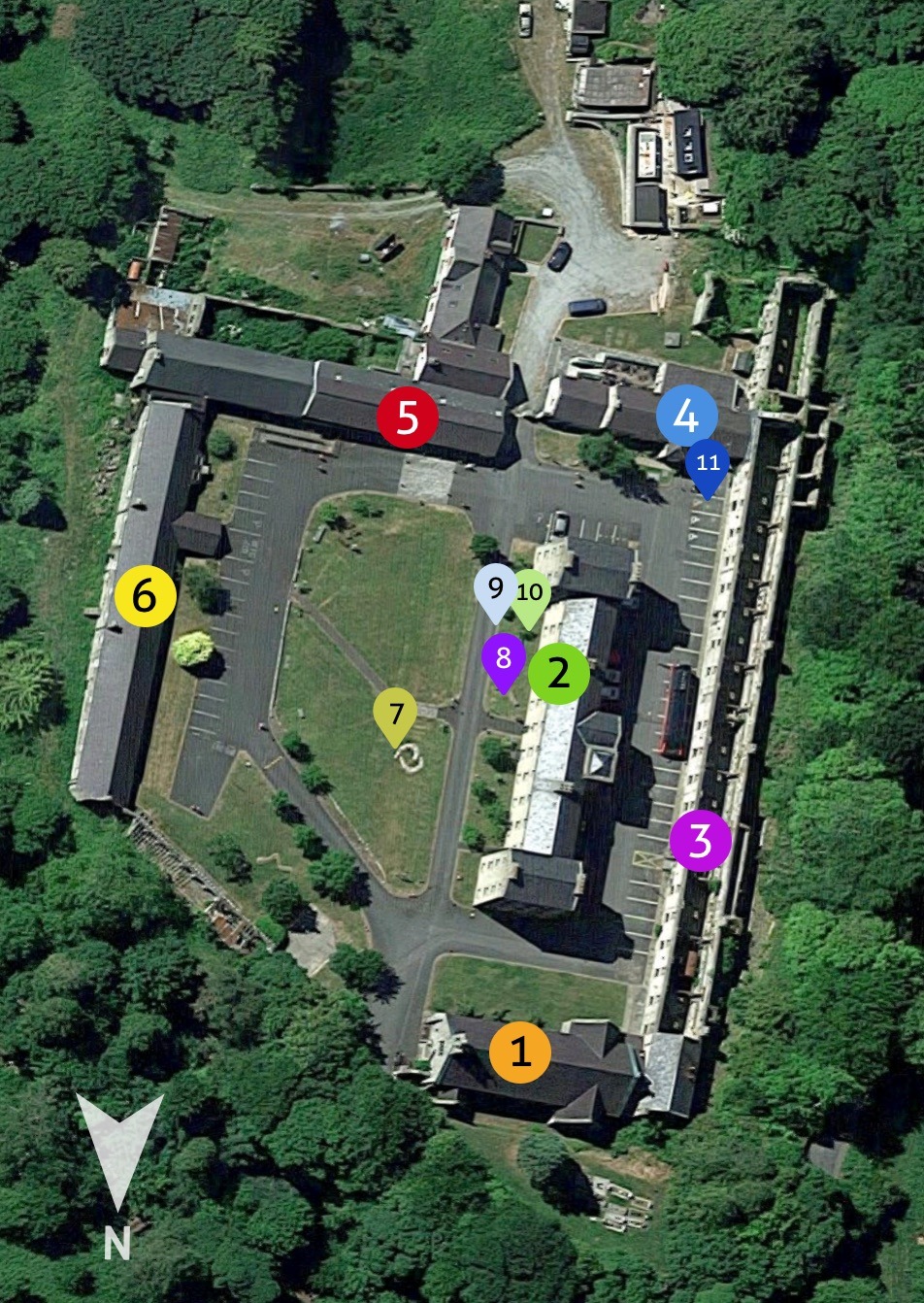 Points of Interest on our Grounds 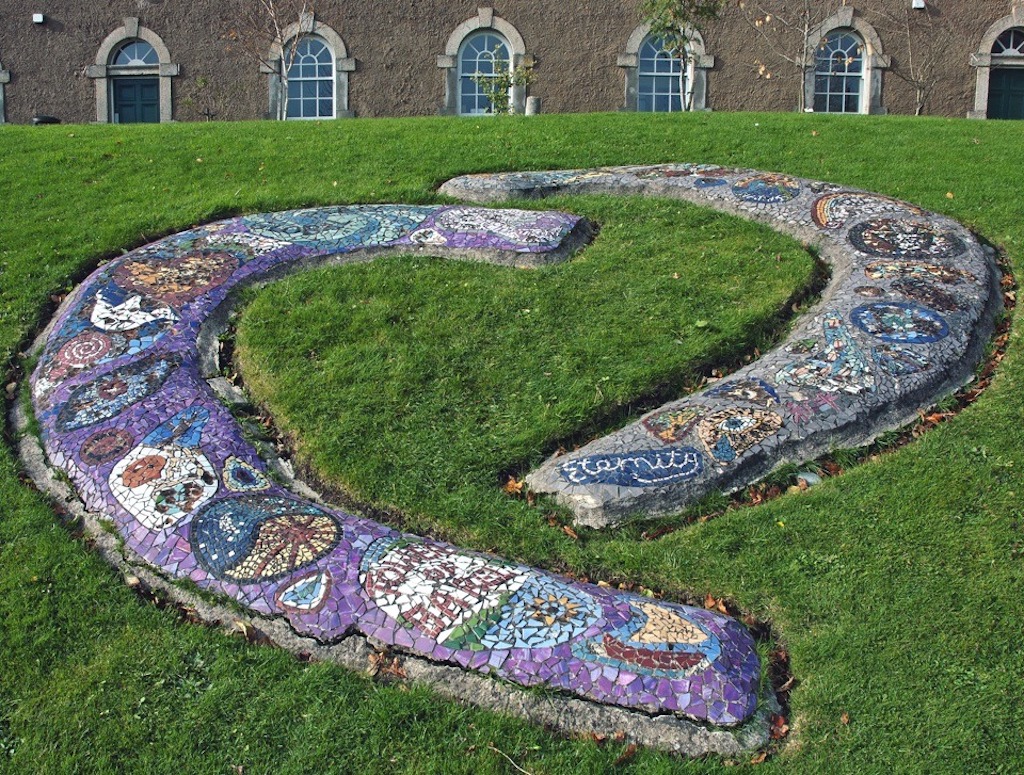 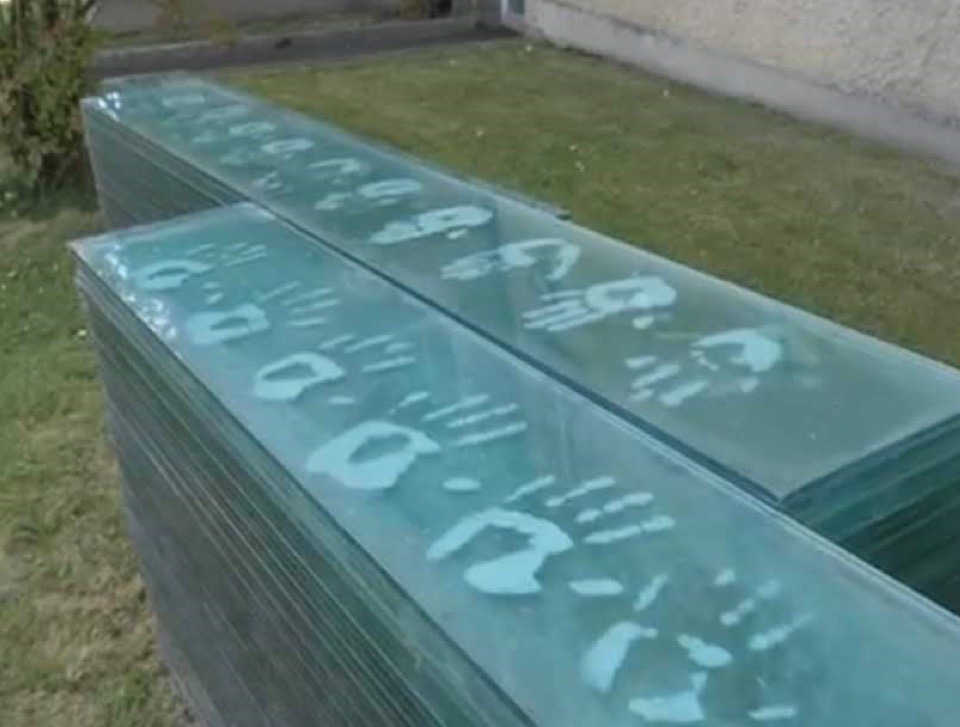 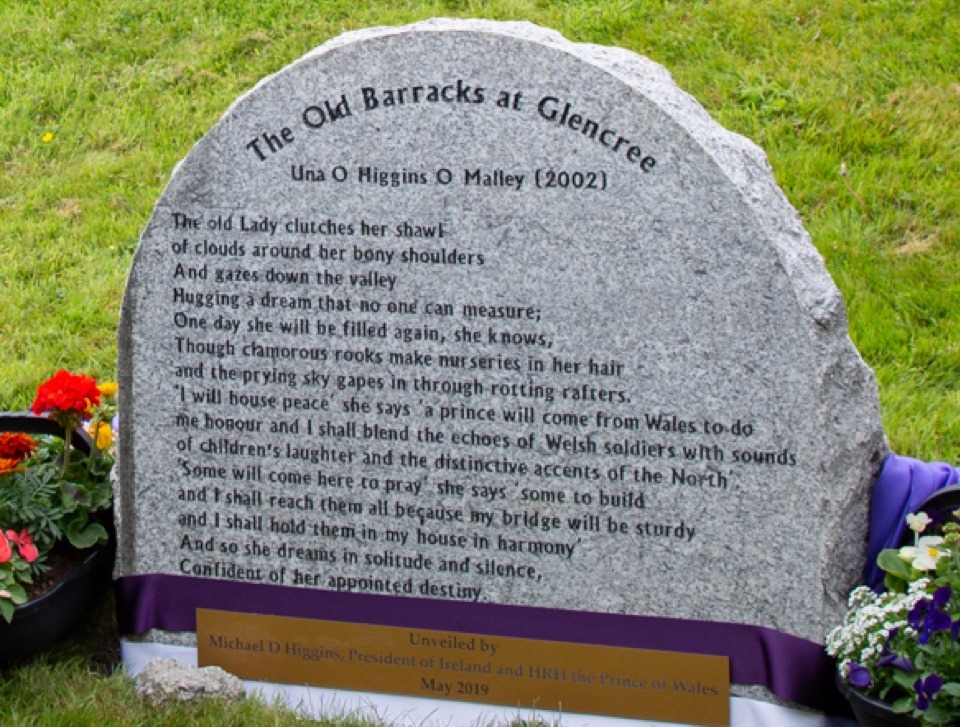 Created by Glencree staff, volunteers and friends, the heart mosaic that has become synonymous with our peacebuilding work was created over a three year period from 2002-2005 as part of the LIVE (Lets Involve the Victims Experience) programme. Embedded in the heart are fragments of moon rock, the Berlin Wall and stones sent from all over the world by ardent Glencree supporters and peacemakers.

The installation by Belfast-based artist Gerald Boyle was constructed in glass featuring 1,000 handprints from people in Northern Ireland. Reacting to the size and scale of Belfast’s largest peace wall, Gerard wanted to create another way to represent a new-found peace. His vision was one where people could leave their mark for peace on this fragile and transparent structure which, like peace, can be easily shattered.

"The Old Barracks at Glencree"

An engraving of the poem by Glencree co-founder Una O'Higgins O'Malley sits by the main entrance to the Bridge Building. It was unveiled by HRH Prince Charles and President Michael D Higgins, Patron of Glencree, in 2019 to commemorate the brave and determined peacebuilding work that Una and her follow co-founders of the Glencree Centre for Peace and Reconciliation started in 1974. 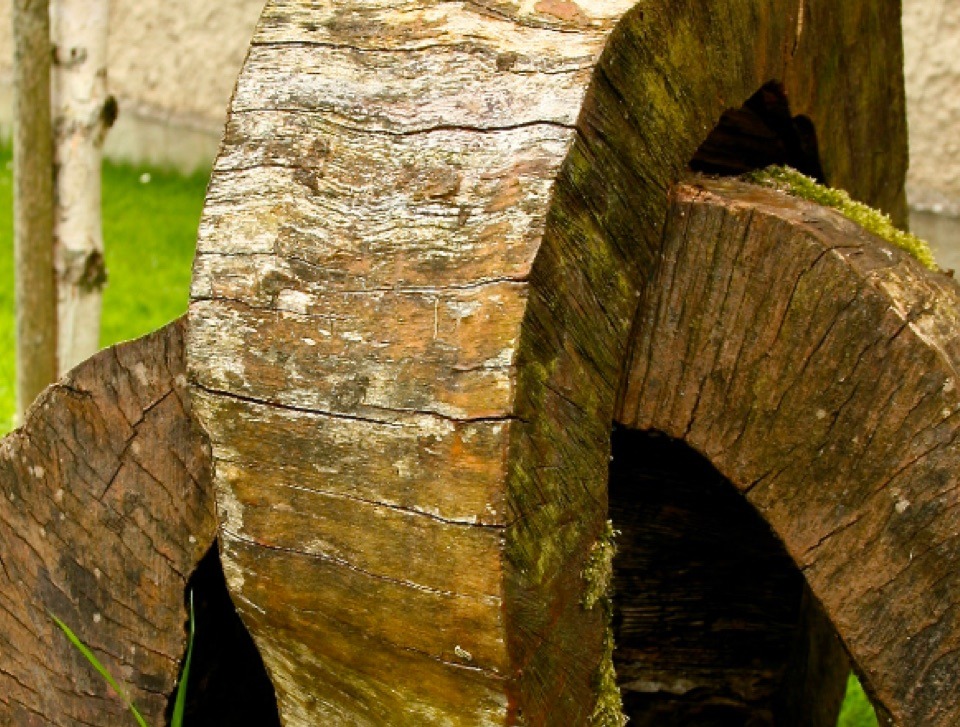 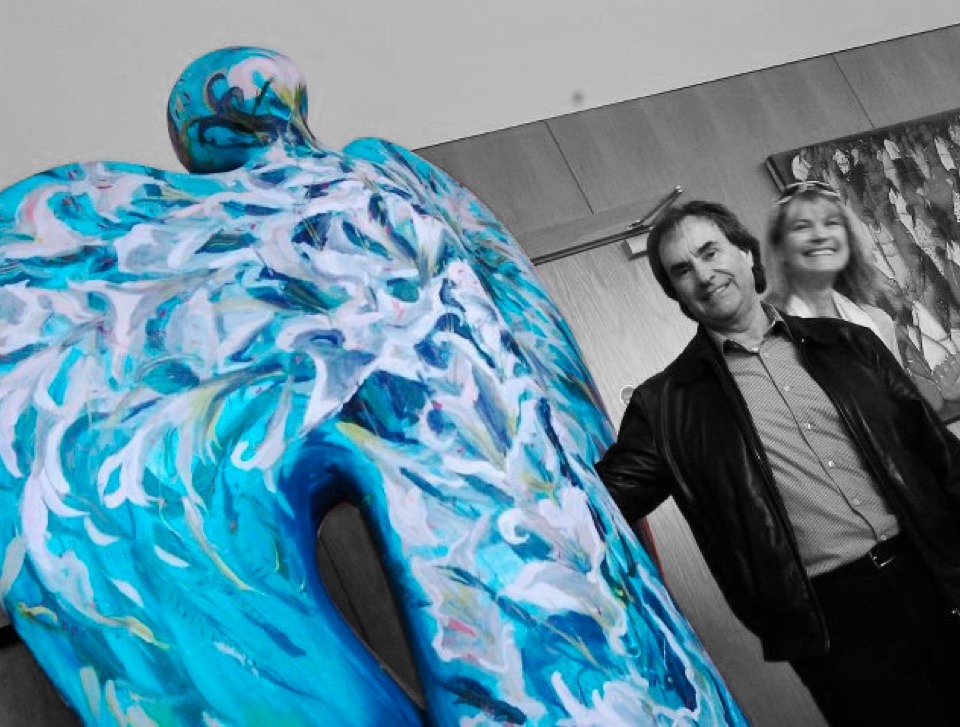 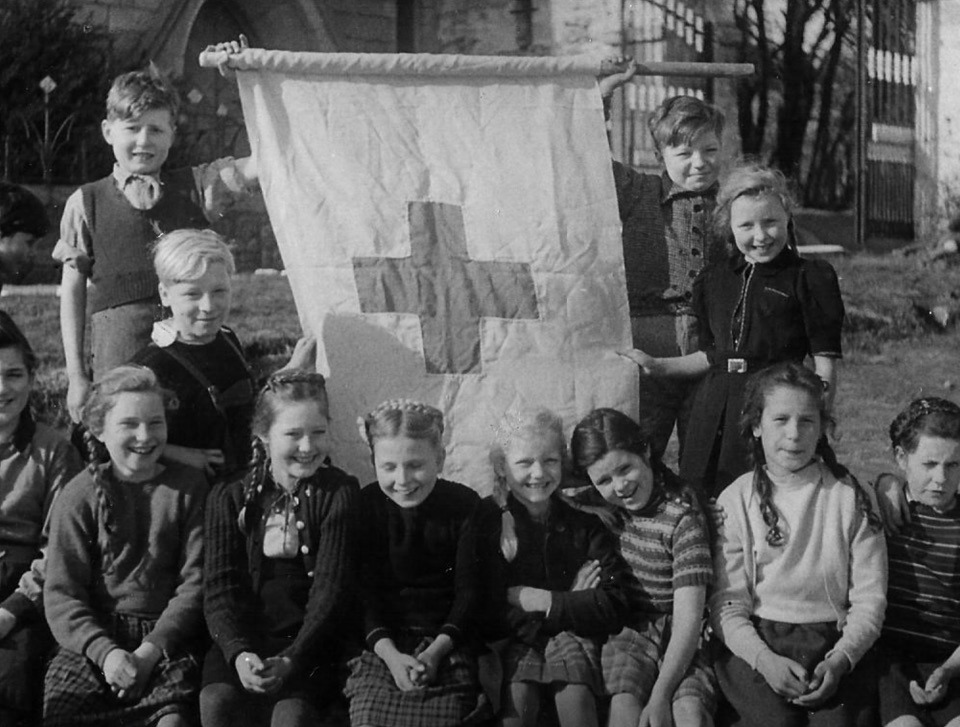 Everyone who comes to Glencree knows Pat, our Caretaker. His deep knowledge of our history and surroundings is as interesting as his quiet love for creating arts and crafts - particularly from materials he salvages on site. A large piece of fallen oak? Pat created a sculpture designed to puzzle those of us who wonder how he inter-linked these pieces of hollow trunk!

The Angel of Hope

Painted by artist and poet Gerard Byrne. Donated to the Warrior Programme Ireland (supporting current and ex-service members who suffer from anxiety, depression and stress) by Nollaig Fahy. Acquired at auction in support of the Warrior Programme by singer Chris de Burgh. Gifted by Chris and his wife Diane to Warrior Ireland. Subsequently gifted to Glencree for our support of the Warriors. The Angel of Hope is now firmly settled in Glencree.

Operation Shamrock, detailing the period when children and orphans from Germany and other countries were given refuge by the Red Cross at Glencree, is on permanent exhibition in the Bridge Building 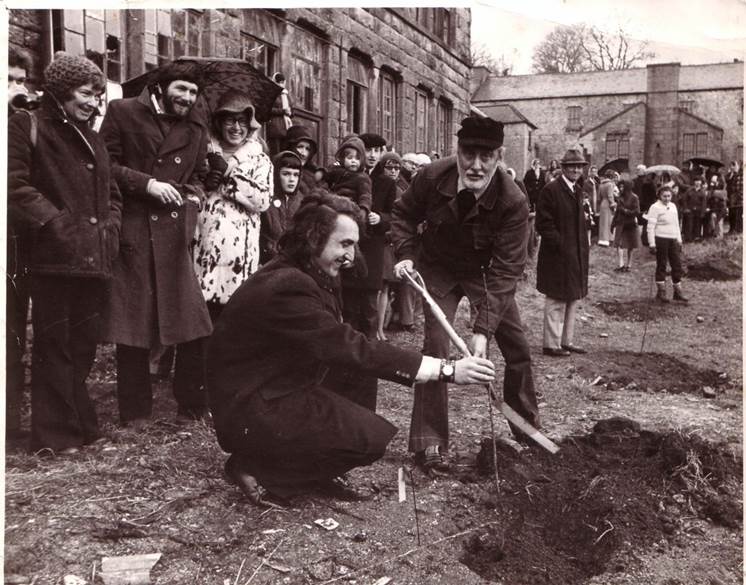 Sensitive to our natural surroundings, over the years we have invited friends and peacemakers who share our common vision for sustainable peace to plant a commemorative tree in the grounds of Glencree. Among those nestled into the landscape are trees planted by HRH Prince Charles, Mo Mowlan; a tree in memory of young Tim Parry who lost his life in the Warrington bombing in 1993; a tree planted in memory of our dear colleague Jacinta De Paor. 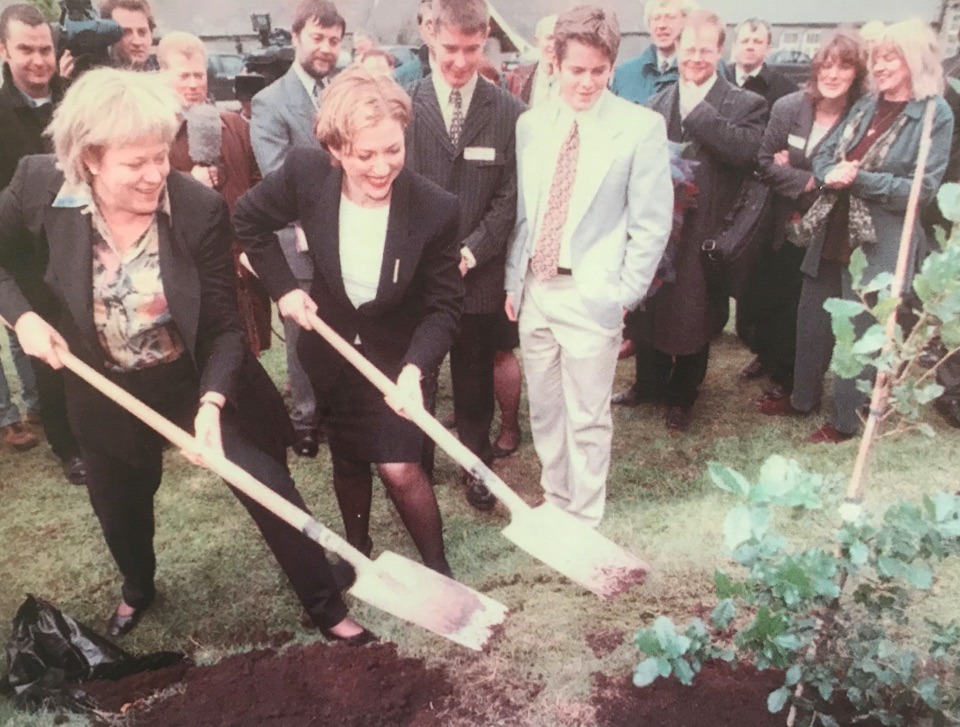 A short stroll from the Glencree Peace campus, is a stark reminder of the devastation of the First and Second World Wars. Set in a landscaped quarry, the German Military Cemetery is one of the many German war cemeteries in Western Europe. The bodies of 134 German military servicemen and civilians are buried here.

Although a neutral country on the edge of the main battlefields, Ireland did not escape the direct effects of the war. Many Luftwaffe (Airforce) personnel were killed in action over the country when their aircraft strayed off course in foul weather, or crashed as a result of damage while in action over England. Running out of fuel and navigational errors due to inexperience were also a cause of fatalities.

Interred here also are a number of regular naval personnel (Kriegmarine) whose bodies washed up, sometimes in remote coastal locations. Of the eighty-one air and naval servicemen buried in Glencree, the identities of twenty-eight remain unknown.

Those who engaged in the ‘secret side of war’ are also buried here. Dr. Hermann Gortz, who took his own life to avoid arrest as a spy, has the only individual memorial - a finely carved stone relief - in the cemetery.

Six soldiers of the First World War are also interred. These soldiers died while in a British prisoner of war camp based in Ireland from 1915-1918.

The cemetery is also the final resting place of forty-six German civilians who were being transported from England to Canada in July 1940. Their ship ‘The Arandora Star’ was torpedoed by the German submarine off the coast of Donegal.

Just inside the wrought iron gated entrance, a poem by Professor Stan O’Brien, a dedicated supporter of the Irish-German Society, set in polished stone, captures the poignancy of this quiet resting ground.

A pathway leads to the ‘Hall of Honour’, a place of reflection and prayer. Just beyond the Hall the gravestones are laid out in eight gently curved arcs, while a mosaic Pieta, designed by Berlz, the Munich born painter, adorns the interior wall. Set on a height above the cemetery is a fine Celtic cross. 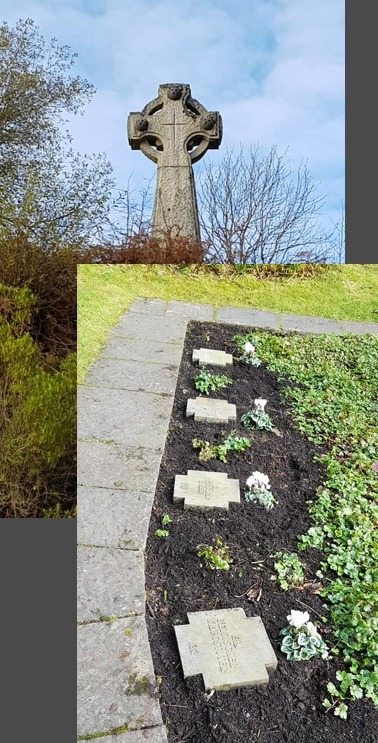 Enjoy the hospitality of the Armoury Café, find out how our peace & reconciliation work is supported by the Glencree Visitors' Centre (GVC), and discover some local walks & hikes.

Glencree is located in an area of great natural beauty. The glen and surrounding mountains provide many opportunities to walk and ramble. Discover some of the local trails here. 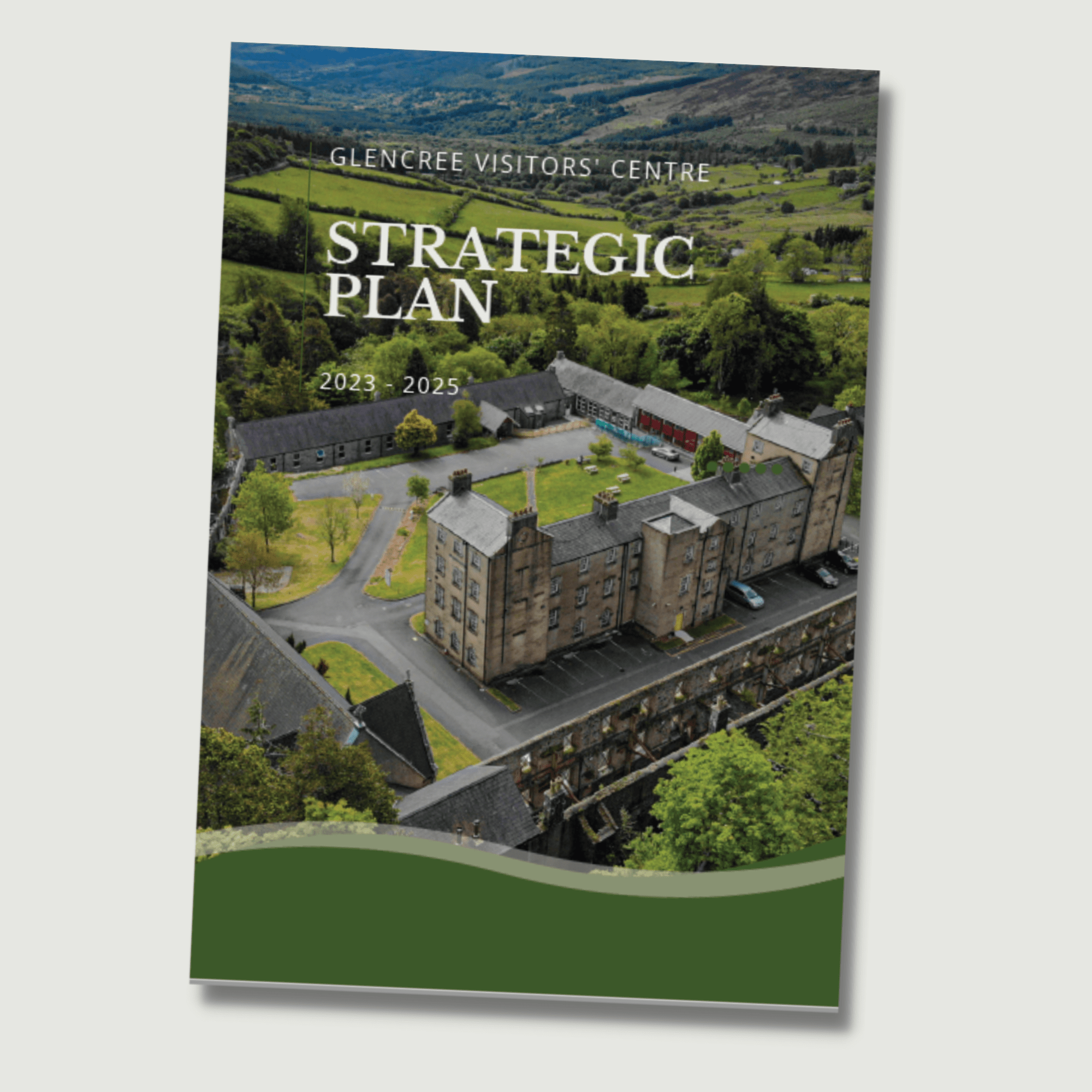 The Glencree Visitors' Centre was established in 2008 to provide hospitality services to support the work & activities of the Glencree Centre for Peace & Reconciliation. View the GVC Strategic Plan 2023-25.

Our little corner of the world is about heart, hospitality and nourishment, serving wholesome food and reviving beverages. We invite you to relax, have a chat, enjoy yourself, and take in the wonder of nature.

Armoury Café
Become a Member
Have a voice
Donate
Support Peace
Follow us on
Stay up to date, help spread the word