From rebellion, famine and war, to the home of peace and reconciliation

The Glencree Centre for Peace and Reconciliation was founded as a response to violent conflict in Northern Ireland, and in light of a conviction that there must be a better way than violence and vandalism, intolerance and sectarianism.

A spirit of commitment to these ideals inspired the foundation of the Centre and continues to motivate its conflict resolution and peacebuilding work today.

Following a particularly horrifying outbreak of bombing in Belfast, in 1972, a number of people and groups met in Dublin to protest against the atrocities being carried out in the name of Irish people and to voice the grave concern felt by the public at large at the escalating violence.

However, concern was not enough. Individuals and peace groups involved soon recognised that reconciliation was the key and that what was needed was a common base from which to spearhead an effective and non-violent approach to the urgent issues both north and south. As a result of their determination to act, the Glencree Centre for Peace and Reconciliation was founded.

The old buildings at Glencree were made available by the government and a large overdraft was arranged for essential renovation works to be undertaken. These were completed in 2000.

A lifelong campaigner for peace and justice, Una O’Higgins O’Malley was a founder member of the Glencree Centre for Peace and Reconciliation. Una’s father, Kevin O’Higgins, was Minister for Justice in the first government after partition. He was shot dead in 1927 by anti-treaty forces on his way to Mass. His own father had been shot three years previously because of his son’s political involvement. As recounted to Una by a relative of the assassin, her father’s dying words were: ‘I know who you are and I know why you have done this, but this has got to be the end of killing’.

Although she was just five months old when her father was murdered. Una’s life was dedicated to building relationships of trust between both traditions on this island. She believed that our security depended on the quality of those relationships, not the size and quantity of our weapons, or the strength of our tribe.

Una O'Higgins O'Malley talks to Marian Finucane about forgiveness, reconciliation and her own story leading to Glencree. Broadcast on RTE Radio 1, 2004

The Old Barracks at Glencree

The old Lady clutches her shawl of clouds around her bony shoulders
and gazes down the valley
hugging a dream that no one can measure;
one day she will be filled again, she knows,
though clamorous rooks make nurseries in her hair
and the prying sky gapes in through rotting rafters.

‘I will house peace’ she says, ‘a prince will come
from Wales to do me honour and I shall blend
the echoes of Welsh soldiers with sounds of children’s laughter
and the distinctive accents of the North’.

‘Some will come here to pray’ she says ‘some to build
and I shall reach them all because my bridge will then be sturdy
and I shall hold them in my house in harmony.’

And so, she dreams in solitude and silence,
confident of her appointed destiny. 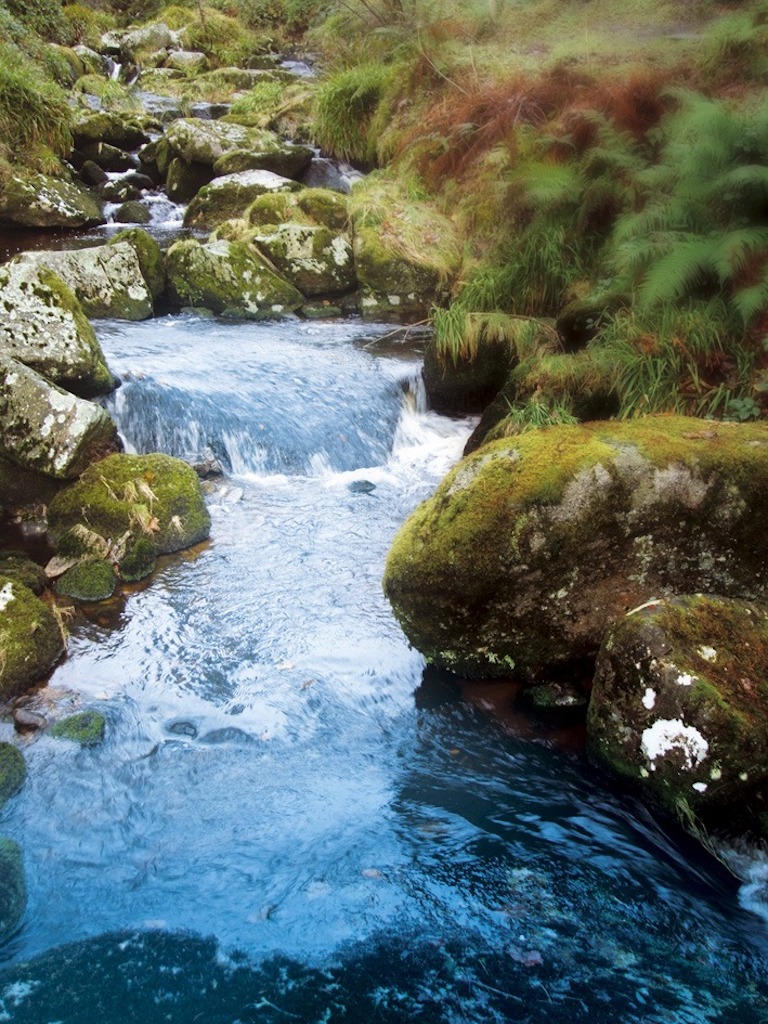 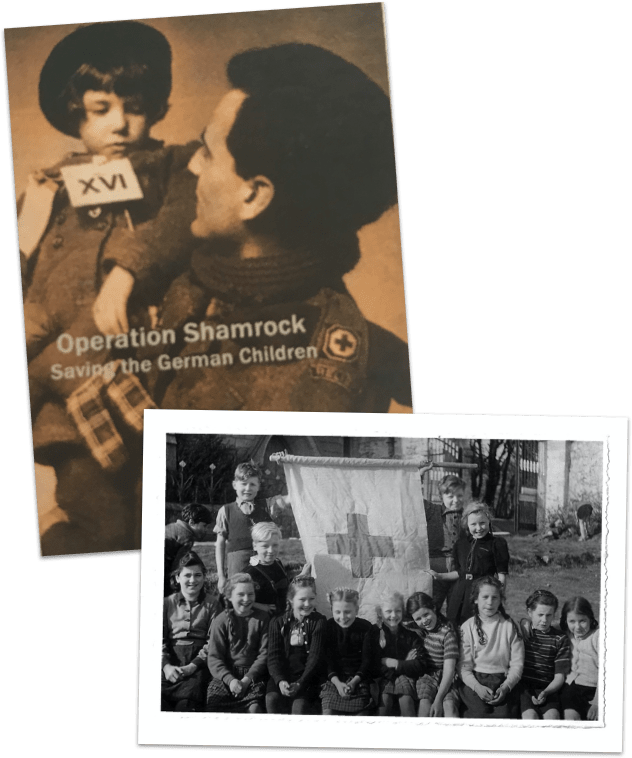 In the aftermath of World War 2 until 1950, Glencree became a temporary refuge for children who were evacuated from war-torn Germany, Poland and Austria by the Irish Red Cross. While many of the children who arrived were orphaned by the war, many others were sent into this temporary foster care in Ireland by parents who faced homelessness, lack of food, and were traumatised as a consequence of the war.

It is thought that close to one thousand children, aged from five to fifteen, travelled overland through mainland Europe and arrived by mail boat into Dun Laoghaire before continuing their journey by road to Glencree. The children were malnourished when they arrived, some were near death. Under the care of the French Sisters of Charity, they stayed at Glencree for a period of recuperation, rest and orientation. With health restored, they travelled onward again into the care of foster families throughout Ireland who had responded to newspaper advertisements placed by the Irish Red Cross.

According to the Committee of the International Red Cross in Geneva, “The Irish people raised a sum of twelve million pounds for the victims of the second World War which is equivalent to £4 per head of the entire population of the country. That was the largest single donation from any country for post ware relief.”

In the 1850s, Ireland was recovering from the Great Famine. Poverty and deprivation were widespread, and young people and children suffered greatly. In desperation, many of them fell foul of the law. A high increase in the juvenile 'crime' of stealing food or vagrancy saw prison numbers increase leading to a public outcry.

The British government responded by passing the Irish Reformatory Schools Act in 1858, extending to Ireland the system that prevailed in England. Lord Powerscourt, owner of the land at Glencree, offered a lease on the abandoned barracks.

The religious order, the Oblates of Mary Immaculate, agreed to establish St. Kevin’s Reformatory on the site. The first superior, Fr. Francis Lynch, took over Glencree in 1858 and rebuilt the property to house up to 300 boys. They toiled hard to reclaim and cultivate more than 100 acres of land surrounding the Reformatory. The boys received some basic education and skills training in the school and workshops built on the site. Fr. Lynch also assembled a 50-strong brass, fife and drum band and choir that played for the local community and at competitions around the country. 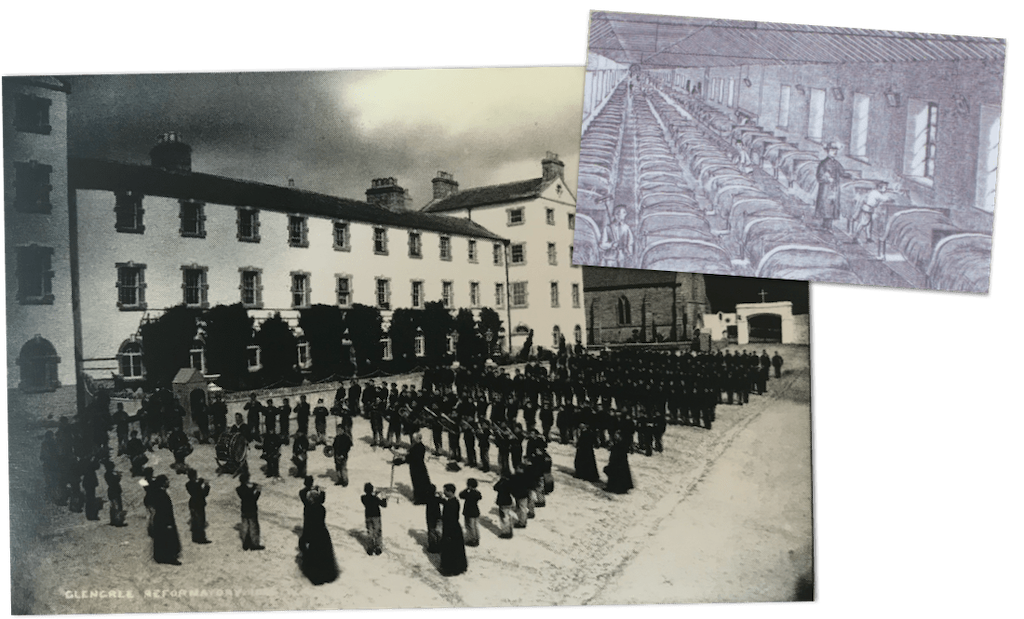 All supplies to Glencree had to be brought over the Military Road, which was frequently blocked by snowdrifts during the winter. As the number of "inmates" increased, several buildings were erected over the years, including a dormitory 306 feet long. The boys were sickly, undernourished and in bad health when they arrived at the reformatory. In 1870, one young offender, sentenced for the crime of “petty larceny”, died from exposure on the Featherbed Mountain on the way to Glencree through heavy snowdrifts. He was barefoot and dressed in rags.

Few records are available for this long, sad chapter in Glencree’s history. We can only assume that, despite the training, food and exercise provided to the boys, life was harsh and brutal for the most part. The reformatory closed it doors in 1940, when the staff and boys moved to Daingean Industrial School, Co. Offaly. The complex then served for a brief time as an Oblate novitiate before passing into the ownership of the Minister of Supply. 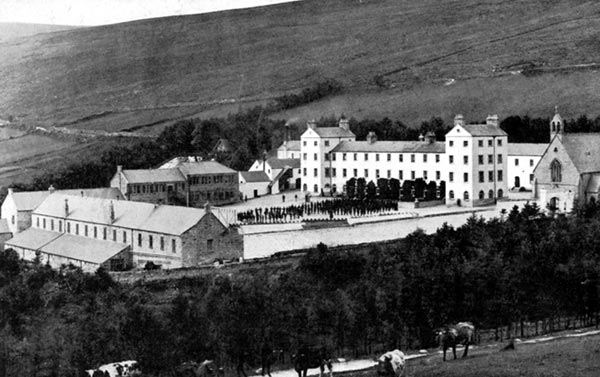 The construction of a military road through the Wicklow Mountains was first suggested in the 1580s to deter Irish rebellion when the Elizabethan Administration of the “Pale” experienced difficulty suppressing the “Tory” fighters of the O’Byrne and O’Toole septs. Construction of the road began in 1800 through parts of the county “infested with insurgent plunderers”. The road commenced from Rathfarnham in Dublin to Killakee and continued over the Featherbed Mountain to Glencree, where a major camp was formed. There were four work parties of fifty men each. Soldiers were paid a shilling a day and overseers earned five shillings daily; but very few local civilians could be induced to accept work and no “dependence” was placed on those that did.

In early 1802, Earl Hardwicke sent 100 militiamen and 75 Highlanders to advance the project. Work continued until late 1809 when in excess of £14,000 had been spent. By then, the strategic value of the project had diminished, because of the destruction of French naval power at Trafalgar and the shift in emphasis to coastal defences.

In late 1803, five barracks were built along Military Road to ensure it would not fall into local insurgent hands or to foreign enemies. The barracks at Glencree was one of the smaller of these buildings, designed to accommodate a captain and 100 soldiers. When it was completed in 1806, it housed 75 military men. Some £26,000 had been invested in the five barracks which, like Military Road, became wholly obsolete in 1815 when the Napoleonic Wars ended.

Find out more About Us

About Glencree's vision, mission, values and how we work.

Glencree's Strategic Plan 2022 - 2026 outlines the roadmap for the next phase of our peacebuilding and reconciliation journey.

We have a strong, committed team working within Glencree towards the common goal of peace, all experts in their field ready to share their knowledge and provide support.

Glencree is committed to attaining and maintaining the highest standards of governance, to be accountable for what we do and transparent in how we do it.

Governance
Become a Member
Have a voice
Donate
Support Peace
Follow us on
Stay up to date, help spread the word