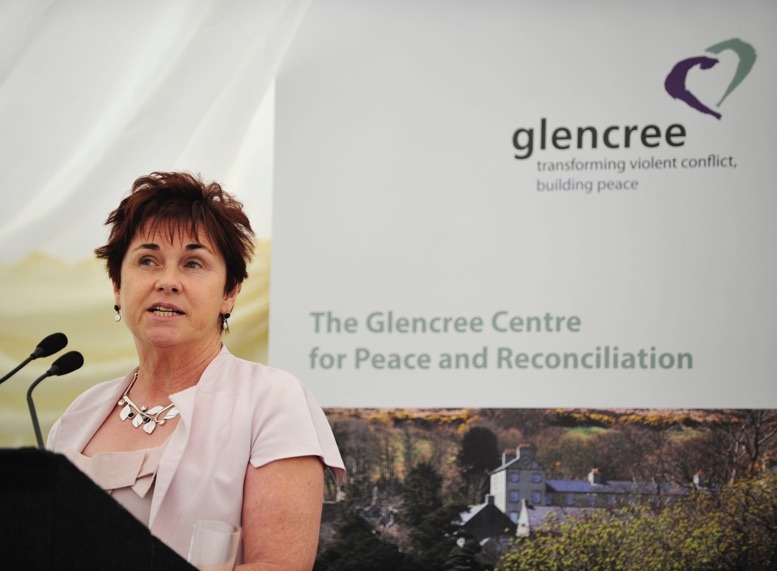 I grew up in East Clare, known then as ‘De Valera’ country. Some of my earliest recollections were fights on a ‘Fair Day’ where Civil War politics between those who were for and against the Treaty that caused the partition of the island were played out in the street. My family was not political. My mother, an Irish emigrant, was a nurse and midwife during the Second World War. She became a war widow when her first husband, a Canadian who served in the British Army, died in a trucking accident outside Rome in the last days of the war. I never knew of this marriage until much later in my own life. Silence!

When my mother married my father, our main preoccupation was economic survival. The advent of free education gave so many, myself included, a route out of poverty into a world of opportunity. The wall of my school classroom proudly featured a green map of Ireland with a large orange blob in the top right-hand corner. Heroic history stories always involved dying for your country, living for it was not part of the narrative.

On my way to school each day, I passed a crumbling Protestant church tucked away at the bottom of the hill in the small town where I grew up.  As I moved into my late teenage years, it disappeared along with the small community who worshipped there. I never heard anyone talk about the people in that community: who were they, where did they go, did they leave by choice or were they forced to go? Or was it too cold a place to stay after the New State was formed? More silence!

Like many young people then, I was obsessed with the future. I watched the Northern Ireland conflict, as so many in the Republic did initially, through the lens of a black and white television relieved that it was ‘up there’ and not ‘down here’. Much later, I became aware of the complexity of ‘our shared home’ to quote the late Seamus Mallon.

In July 2005, my youngest son William was on his way to work as a young architect in London. On the tube, somewhere between Aldgate and Liverpool Street, a bomb exploded in the carriage where he was sitting. Although seven people in the carriage were killed, he managed to get out with extensive though non-life-threatening burns but thankfully alive! His life was changed forever and mine took another turn.

Asked by a gentle Northerner, I joined the Board of the Glencree Centre for Peace and Reconciliation, a peace centre set up in 1974 in response to the outbreak of violent conflict in the north. As newly elected Chair, I was preoccupied with the devastating impact of the 2009 recession, the loss of skilled staff and international volunteers together with the threatened closure of the centre.

In time things stabilised and through this peacebuilding work I discovered the many remarkable women and men from different faiths, and none, appalled by the violence so often in the name of religion who had taken a stand for peace at Glencree. They worked together to transform a ramshackle collection of buildings that once served as a Military Barracks, a Reformatory for boys and young men and a Centre for German Refugee children until it was reborn as a Peace Centre almost 50 years ago. Quietly and steadily, they set about reconciling the divisions and political conflict on these shores, a legacy of partition of the island and the subsequent Civil War. Among them, I encountered Una O’Higgins O’Malley.

Una O’Higgins O’Malley was the daughter of Kevin O’Higgins, the first Minister for Justice of the Free State Executive after partition. Although she was only five months old when her father was assassinated in 1927, his loss and his legacy of forgiveness were the dominant influence that explained much of her public life as an adult. According to a relative of his assassin, her father’s dying words were ‘I know who you are, and I know why you have done it and I forgive you, but this will have to be the end of the killing’.

Una’s daughter Iseult recounts that as a child her mother found herself having to console total strangers who would weep for her father when introduced to her. In an interview with the late Marian Finucane to celebrate thirty years of Glencree’s work for peace, Una talked about the ‘black lava’ that came over her when she heard that one of the assassins had danced on her father’s grave. Her journey of reconciliation began when she arranged for a mass to be said for her father, his assassins and both Civil War political traditions.

The themes of reconciliation and justice run deep in Una’s life. While the peace movement was central to her life’s work, her involvement always stemmed from a feeling that injustice was happening, and something has to be done. For her it started with helping to get Meals on Wheels into the Mater Hospital and campaigning to improve the appalling housing conditions of the Traveller community in Dublin.  She also assisted in the production of the MacBride Commission on penal policy and campaigned for the Irish Council for Civil Liberties.  Her decision to run as an independent in the 1977 general election campaign on a reconciliation and justice platform brought her into direct conflict with the party representing her family tradition, but she was convinced that the issues of reconciliation, social justice and garda misconduct required her to take a stand. She was also a strong believer in the ecumenical movement.

However, it was the peace movement that eventually came to absorb most of Una’s efforts. From the early days of protesting against the IRA outside the Sinn Fein offices, through the running of holidays in Newbridge for pensioners from Northern Ireland, to the establishment and development of the Glencree Centre,  her abiding theme was that ‘we were called to forgive each other and accept each other on this island’. Before the words ‘soft power or soft diplomacy’ were ever spoken, she practiced it, bringing together political leaders and influencers not just from the north but from the UK to have quiet conversations away from the media on contentious issues leading to greater understanding of the ‘other’.

In January 2021, Irish Ambassador Geraldine Byrne Nason will take up a non-permanent seat on the UN Security Council alongside Norway – two small countries on the periphery of Europe at a time when jockeying for global power is rife and where economic uncertainly stalks peoples’ lives. A strong advocate for women at the helm of peace and security, global and local issues, her two-year tenure will be challenging. Tensions between large power blocs China, US and Russia will not make it easy to make an impact but our presence will perhaps be a reminder that ‘we are all in this together’. We can also bring our experience of the hurt and horror caused over thirty years of violent conflict and the move into a post conflict situation while struggling to overcome our violent past.

Although Una died in 2005, facilitated dialogue remains at the heart of the work of Glencree today.  We continue to work towards the creation of all-island peace, dealing with the legacy of past violence, the implications of the UK and their decision to leave the European Union and the emerging Constitutional question that has resulted. Our recent work with Refugees and Asylum seekers who have made Ireland their home is new but much-needed work to combat racism and xenophobia. Glencree has reflected on its global responsibilities for peace and is working toward the development of a Global Peace Campus, a place that would welcome countries in conflict, a place to learn about Glencree’s experience and dynamic dialogue processes and to learn new ways of addressing violent conflict in collaboration with others.

Una’s favourite quotation from her father came from one of his letters: “…but we carried our brick and we laid it fair and square and as well as we knew how”.  The same can be said of the work she started almost 50 years ago and that continues at Glencree today.