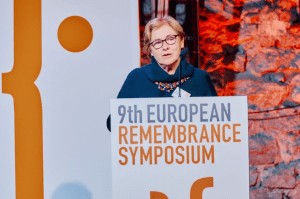 9/11/2021: Glencree Chair Barbara Walshe attended the European Remembrance Symposium of the European Network Remembrance and Solidarity (ENRS) in Tallin, Estonia. Under the theme of ‘Memory and Identity in Europe: Present and Future’, the symposium brought together historians, artists, museums curators and activists to share their experiences of interpreting the complex history of Eastern Europe including cultural and historical stereotyping.

Commenting on the event, Barbara Walshe said: “Former eastern bloc countries, now a part of the European Union, include a rich tapestry of ancient empires and belief systems. For these fragile liberal democratic states and societies dealing with the legacy of communism, repression and the violence suffered, a complex legacy exists where politics, culture, identity, nationalism, and history struggle to coexist and merge in an integrated way. Attempts by museums, artists, and musicians to ‘break the silence’ of fear and the trauma of repression are helping people find a voice and speak or reimagine their experience in a courageous, innovative and bold way.”

“I experienced a strong resonance between their stories and Irish stories of violence experienced and  with the continued legacy of violence which is felt on this island today. Fergal Keane captures it well in his wonderful book ‘Wounds’ when he wrote, ‘History lay in the untold, the silences, the death and decline and the Civil War that divided families’.  Glencree was founded in 1974 out of that violence. Una O Higgins O Malley, the daughter of Kevin O Higgins, Minister for Justice in the first government who was assassinated in 1927, devoted her life to reconciliation. Today, Glencree stands for the possibility that there can be peace anywhere when we act on what is important to us.” Barbara Walshe added.

Now in its fifteenth year, ENRS was set up to foster dialogue on 20th century European history and to support the development of a common European culture of Remembrance. The 2022 symposium will be held in Dublin with the support of the Glencree Centre for Peace and Reconciliation.

To view the panel discussion, please click on this link:

For more information about the event: https://enrs.eu/edition/european-remembrance-symposium-2021 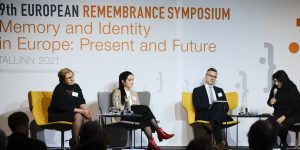 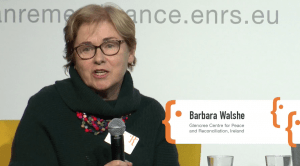