02/3/2021:  As practitioners we were always honoured to welcome the involvement of Prof Enda McDonagh to various events in Glencree over the years where he would always share his wisdom and intellectual rigor to many of the issues relating to peace making in Ireland. A native of Mayo he was originally ordained for the diocese of Tuam before pursuing a career in academia in St. Patricks College Maynooth where he remained teaching Moral Theology until 1995. His teaching in Maynooth coincided with profound change in Irish society that was underway in Ireland throughout the 1960’s to the mid-1990s. This period also saw the eruption of sectarian violence in Northern Ireland; these circumstances for Enda compelled him to engage in ecumenical efforts designed to reach across the religious divide in Ireland during the years of the troubles. 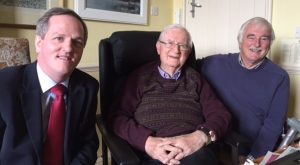 Because of his friendship with Una O’Higgins O’Malley, Enda got involved in several Glencree activities in the late 1970’s and early 1980’s. That personal relationship with Una was an enduring one for many years culminating in a big moment in 1987 when Enda celebrated a memorial mass in Booterstown Catholic church on the sixtieth anniversary of the death of her father, Kevin O’Higgins. In the spirit of forgiveness echoing back to her father’s words, the mass was said for the three men – Tim Coughlin, Archie Doyle and Bill Gannon – who killed Kevin as Minister for Home Affairs in the Free State government in a reprisal altercation on the corner on Cross Avenue in 1927. The moment became very special for Una when Roger Gannon (son of Bill) found a way to be present at the mass and brought a message from his father in London. The circle of forgiveness was fulfilled.

Enda also edited a book (2007) “Remembering to Forgive”, a collection of essays in a tribute to Una. In his own chapter, he wrote: “The process of forgiveness is only completed by the mutual acceptance and appreciation of offender and offended.”

He contributed to two Glencree projects. The first was a British-Irish study group on the politics of forgiveness that ran for about two years (1978-80) led by Brian Frost of the British Council of Churches. Memories from that time include travelling on the ferry with Enda and Una to Holyhead for a day-long meeting to explore issues that eventually led to the production of a study pack. A follow-up encounter was held in Glencree and the paper by Professor Haddon Willmer was subsequently published in the Furrow, a Maynooth periodical that Enda was closely associated with and contributed articles on a regular basis. He took part in many other British-Irish workshops. Tongue in cheek and anticipating difficulties, Enda would ask his British friends: “How is the civil war going in your country?” Their puzzled response was “Which war? Which country?” He would smooth the exchange by acknowledging that British evasion was matched by Irish evasion.

The second project was on pluralism in 1980 at a time when southern Irish society was opening up to include secular groups and move beyond a dominant Catholic culture that forbade divorce. Glencree saw itself at that time as a safe plural space where people with different points of view could come. A lasting memory of that event was listening to Enda in the lower Centre building in his soft and calm voice. It was so free flowing in his use of language and his vision of what Ireland could be. His words were poetic at times and a joy to hear. He was able to talk theology in a political way full of ‘faith-reflexion’ that spoke to the social needs of a particular situation. This was his gift – to contextualise his thinking in the real world, to use non-Church language and embrace all groups.

Enda joined with us on many other occasions in the 1980’s. He went on to become President of the Irish Association for one year to strengthen relationships in north/south people-to-people encounters. He brought so much inter-personal peace through his presence.

Our deepest condolences to his family, friends and colleagues at this sad time.