Welcoming dignitaries, friends, neighbours and colleagues to the Glencree Centre for Peace and Reconciliation campus early on Sunday morning, guests gathered for a circle discussion on the role of dialogue in encouraging peace and reconciliation. French, Dutch and German diplomats exchanged their own experiences of reconciliation with the Assistant Chief of Staff, Irish Defence Forces, former Glencree International Programme staff, Colette Nkunda, Barry Quinn, and many others.

This was followed by an interfaith service at St Kevin’s Church, Glencree, organised by the Lutheran Church in Ireland, with members of the Lutheran, Catholic and Jewish community. Spoken in English, Irish and German, the service by Fr Bernard Kennedy and Pastor Martin Sauter included a recital by the Goethe Choir, a reading by Hilary Abrahamson of the Progressive Jewish Synagogue and an address by Glencree Chair Barbara Walshe. Following prayers in the three languages by children from St Patrick’s National School, Curtlestown, the lighting of the lantern took place.

Carrying the lantern, the children then led the procession from St Kevin’s church to the German Military Cemetery where Piper Anthony Kelly stood at the foot of the Cross, which overlooks the Cemetery, as guests arrived. Ambassador Meier-Klodt and representatives of veteran organisations laid wreaths in remembrance of those who lost their lives. After some time for reflection and remembrance, guests returned to the Glencree Campus where they enjoyed the warm hospitality and wonderful food of the Armoury Café.

Glencree wishes to thank everyone who took part in this year’s commemoration and in particular the Irish Defence Forces for providing the marquee and the children, their parents and teachers at St Patrick National School Curtlestown. 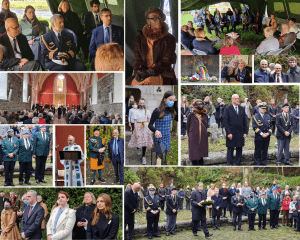