Glencree welcomes President of Germany during State Visit to Ireland 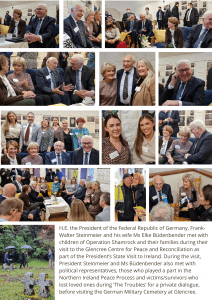 Büdenbender to the Glencree Centre for Peace and Reconciliation on day 2 of the President’s State Visit to Ireland.

During the visit The President and Ms Büdenbender met with children of Operation Shamrock, the refuge programme for German children in the aftermath of World War 2. The meeting with Ms Kathe Carroll, Mr Heinz Kampes and their families featured a warm-hearted chat about their experience and relationships both here in Ireland and Germany.

President Steinmeier and Ms Büdenbender then joined Glencree’s Community & Political Dialogue team and Peace IV Legacy of Violence team to meet with political representatives, those who played a part in the Northern Ireland Peace Process and victims/survivors who lost loved ones during ‘The Troubles’. The discussions focused on the impact of Brexit on the Peace Process and the wish of victims/survivors that justice not be sacrificed for perceived peace.

The delegation enjoyed the hospitality of Glencree’s Armoury Café and took part in engaging discussions about Glencree’s broader peacebuilding work with members of the Programme teams.

The visit concluded with a trip to the German Military Cemetery, where Glencree Historian Mr Frank Tracy spoke of the history of the Cemetery and those interred there, after which The President and Ms Büdenbender had a quiet moment of reflection and laid flowers on the graves.

Glencree extends its thanks to the Department of Foreign Affairs, the German Embassy in Dublin, the Special EU Programmes Body – SEUPB, dialogue participants and all who attended and contributed to make this event a success. 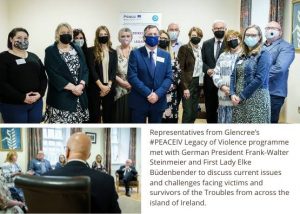