Open Wednesday-Sunday 9.30am-5pm in the Armoury Cafe until 28 October

21/09/22: The Glencree Centre for Peace and Reconciliation (Glencree) is delighted to host the Herstory Peace Heroines exhibition and education programme which tells the inspirational stories of women who played a role in the Northern Ireland Peace Process and Belfast / Good Friday Agreement. The exhibition, which opens in Glencree on 23 September, features new portraits of the peace heroines by the artist FRIZ, and youth workshops exploring power.

Women from all walks of life played a pivotal role in the Northern Ireland peace process and continue cross-community dialogue and reconciliation projects today. Ordinary women with extraordinary courage, they faced daily threats to their lives and the lives of their families. Many overcame struggles with poverty, poor education, and personal tragedy to work together for peace. They did everything from supporting victims of sectarian violence to lobbying politicians, founding integrated education, starting cross-community projects, organising mass peace marches, and inspiring women to participate in political and public life.

From grassroots to government levels, the exhibition captures a diversity of voices and perspectives, featuring 30 women’s stories including Monica McWilliams and Pearl Sagar, Linda Ervine MBE, Pat Hume, Baroness May Blood MBE, Mo Mowlam and Saidie Patterson. Powerful partnerships are explored such as Peace People, NI Women’s Coalition, Women Together, Derry Peace Women and the special dynamic between Shankill and Falls Women’s Centres through the leadership of Eileen Weir and Susan MCCrory.

The crucial role these women played in the peace process in Northern Ireland is recognised by the United Nations in a case study. International peace delegations from Congo to Columbia now examine and refer to the participation of the Women’s Coalition in what is widely considered to be one of the most successful peace processes in the world.

Peace Heroines was developed by Herstory in partnership with the National Museums NI and the Department of Foreign Affairs Reconciliation Fund. It was launched by Minister for Justice Naomi Long MLA at the Northern Ireland Assembly, Stormont on the 21st September 2022, the International Day of Peace. 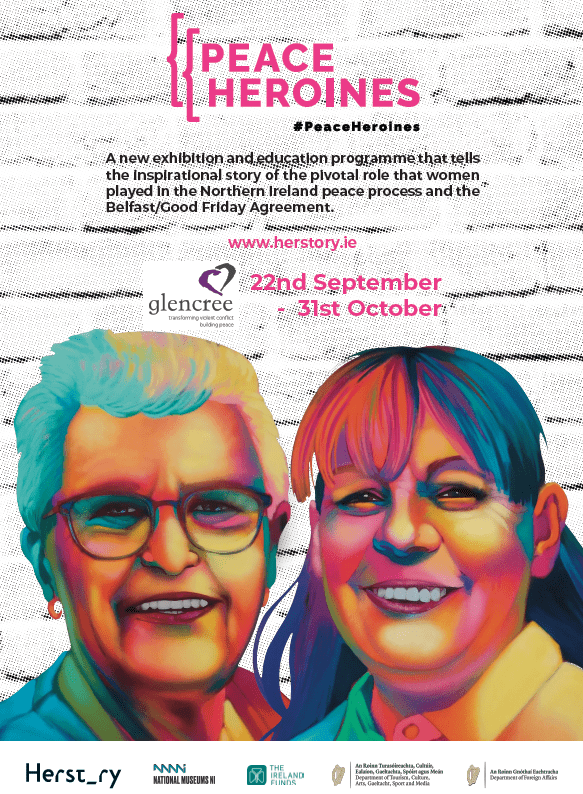 The exhibition will then move to the County Museum Dundalk. In early 2023, it will move to Derry and Belfast before going on display in the UN in New York in March. Click here to view the full scheduled and for more information on the Herstory Peace Heroines exhibition.