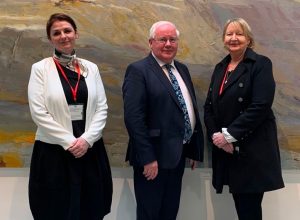 Naoimh McNamee, CEO and Roisin McGlone, Programme Manager, Glencree, arrive at Leinster House for a presentation to the Joint Committee on the Implementation of the Good Friday Agreement, Chaired by Deputy Brendan Smith TD

18/2/22: Naoimh McNamee, CEO of Glencree, and Róisín McGlone, Programme Manager for Glencree’s PEACE IV-funded ‘Addressing the Legacy of Violence through Facilitated Dialogue’ programme, yesterday outlined Glencrees work, particularly within the victims and survivors sector in Northern Ireland and across the island of Ireland, to the Joint Committee on the Implementation of the Good Friday Agreement.

Presenting on Glencree’s work with victims and survivors, Ms. McNamee said: “Glencree doesn’t represent Victims and Survivors, we walk along with them. We have our planned level of activity and also remain flexible to what is going on in the social and political context, and what the victims and survivors want themselves. When we’re talking about victims and survivors and what they’ve been through, the power has been taken away from them.  So when it comes to the process of reconciliation, or people being able to work through the issues they have, giving them some power in that process is hugely important, and is an important part of what Glencree does.”

In her presentation, Ms McNamee referenced the divides that remain along communal lines 25 years after the Good Friday Agreement, inadequacies of the political processes in both jurisdictions to address the issues faced by victims and survivors, and the importance of non-partisan organisations in facilitating engagements that provide skilled and meaningful support to victims and survivors. “Informal diplomacy, back-channel discussions, and getting people engaged in the debate is also critical.” McNamee added.

As well as underlining Glencree’s commitment to work within the victims and survivors’ sector in Northern Ireland, in response to questions from the Committee, Ms McNamee also confirmed Glencree’s plan to establish a Centre of Excellence in practical peacebuilding designed to upskill the next generation of peacebuilders.

A recording of the presentation and discussion can be viewed by clicking on the button below.