The Passing of Pat Hume

03/09/21: The Board and Staff of the Glencree Centre for Peace and Reconciliation wish to express their heartfelt condolences to the family and friends of the late Pat Hume, who died in the City of Derry last evening. Alongside her late husband, Pat Hume gave a lifetime of public service to the people of Derry, beginning as a teacher, a community activist advocating for better conditions in her community, and ultimately as the most significant and essential adviser to John Hume during the grim years of violence that preceded the peace process of the 1990s.

The resilience and determination she demonstrated with John at critical moments in the Peace Process ensured that we saw an end to the corrosive effect of violence and a re-framing of the conflict in Ireland as a challenge of broken relationships that needed restoration through dialogue.

We send our condolences also to our friends and colleagues at the Hume Foundation, an organisation that Pat was instrumental in establishing so that the vision of John and the principles that guided both of them would forever be remembered by generations in Ireland and around the world. 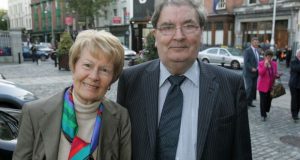 John and Pat Hume in Dublin in 2009. Photograph: Frank Miller / The Irish Times